The financial benefits of excellence

Here are the numbers of budget funding sources and how they have changed over a three year period. Note that the state fraction has dropped by 50%. Also note that all categories except state funding are much higher now -- the capacity of the university to invest in education has increased by 25%. Gifts and grants show the largest percent increase, but an equally important category in terms of total amount is tuition and fees. Some of this has come from tuition increases, but for the most part those increases have been used strictly to balance losses in state funding. Most of that increase is driven by the increase in enrollment, especially for out of state students.


And for those students wondering why tuition keeps increasing, check out the chart below. The central feature of the New Partnership agreement was to stabilize the level of state contribution in order to generate tuition stability over the long term. This is still a worthy goal, not properly acknowledged by the OUS. 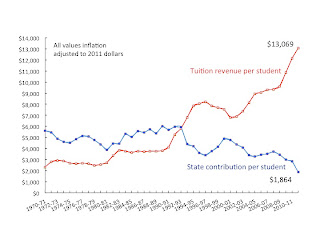